I don't pretend to be a carp guy.  Sure, I've spent a fair amount of time chasing them around in the Denver South Platte, but really, spooking every fish in the river is mostly what I've done.  The construction project I have been involved in the last couple years is at Metro Wastewater, so I've become fairly familiar with the brown water up in Commerce City, and my carpin' adventures have also taken me south towards Invesco Field and further down Santa Fe.  I watched firsthand the cleanup efforts by Suncor on Sand Creek, and was even involved in some plant wide evacuations due to benzene levels at MWRD.  Rick Mikesell, Assistant Manager at Trouts Fly Shop first helped me out with my initial fly selection for the DSP, mostly sticking to Carp Breakfast and Backstabbers for most of the carpin' I've done.  I have landed some very nice carp in the last couple of years, but I am the first to admit that trout fishing will always be my first love.

But regardless of species, one thing that is a constant for me is my love for learning and tying new flies.  And carp flies are no exception.  And the best place, at least for me, for learning about anything carp is Fly-Carpin.  McTage, the author of the blog does a great job of helping keep people up to date with all that is carpin'.  Most of the flies that I've tried tying are either his flies, or flies that he has spotlighted on his website.  But above all, I learned the most about carp flies from the 2012 Fly-Carpin Fly Swap.  Never had so much information from such prominent fly tiers been so readily available, all collected and posted on one page.  So I literally jumped at the chance to be included in the 2013 Fly Swap, and am very excited to be a part of it this year.

I decided to enter a fly that I call the Carpsicle for the fly swap for this year.  It's a fly that I started tying last summer, and I spent a few of my carpin' outings using this pattern.  When I thought of flies that had worked for me in the past, it was always the heavier patterns that allowed me to present the fly better to the fish, and I really liked the action on flies like McTage's Leather Head Stand Carp Worm.  I put the tungsten bead and the dumbell eyes to not only help the fly ride point up, but help give it a little more action when stripping it in front of a feeding fish.  I used a marabou tail, and the rubber legs to give the fly some of the alive, pulsing action in the current which I believe helps entice a carp to eat.  I've used different styles of dubbing on the Carpsicle, but settled on the Orange Ice Dub, because I really like the way it looks in sunlight, and it gives me more confidence in the fly as well.  I am happy with the progression of the pattern, and I hope you tie some up.  If you do, let me know if you have any success with the Carpsicle!! 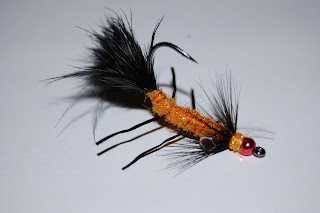 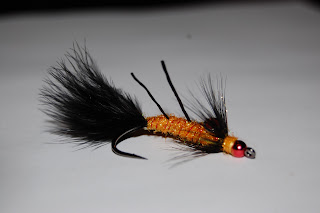